The Early History of the Sandhills Woman’s Exchange

In 1922, a small group of women joined together based on a need and a desire. The need was the women and families of the Sandhills. Life was hard in the rural counties. Poverty was common. Health conditions poor. Paved roads were few. Telephones mostly non-existent and country women rarely left their homes. That was the need. The desire was how to help these women.

Having admired the locally made quilts, rugs, coverlets and other handcrafted items, along with the abundance of jams, jellies, preserves and canned goods at the Sandhills Fair in 1922, Katherine Tuckerman, Molly Lovering and Darthea Cowgill knew the Sandhills needed a Woman’s Exchange. The Federation of Woman’s Exchanges was an organization begun in the 1830’s that arose from the need for women to find a means to earn income. Giving women an outlet to sell their handcrafts and culinary goods was a radical idea at a time when women could not or did not work outside the home.

While Katherine had the organizational skills, Molly was knowledgeable in handcrafts and culinary techniques, and Darthea was practical, with passion and drive. Molly and Darthea became the connection to, and the delivery service for, the rural women. Driving miles along rutted, sandy country roads, they established relationships and friendships with the women, teaching them new crafts and processes for preserving, and if needed, providing them with the supplies to create goods to sell.

More women were drawn to the idea of an exchange, and on May 2, 1923, they met to discuss formally establishing the Sandhills Woman’s Exchange. They organized, divided duties, secured funds and searched for a place to operate. In the fall of 1923, the SWE began operations on the porch of what was known as the Way House on Pee Dee Road, between Southern Pines and Pinehurst. The season was an outstanding success and thus began the search for a larger space, and with the help of Gertrude Tufts, found a home in the log cabin still occupied today by the SWE.

The SWE log cabin was built in the early 1800’s by James Ray, near his grist mill. The McKenzie family later acquired it for use as a kitchen. When James W. Tufts, developer of Pinehurst, saw it, he was so charmed by it, the McKenzies gave it to him. He moved the one-room cabin to the Pine Grove in the Village in 1896 and had it restored. The cabin had been used as a museum and caretaker’s cottage before his daughter-in-law, Gertrude, initiated the donation of the cabin to the SWE.

For 100 years, hundreds of women have volunteered their time, donated money, solicited funds and gathered supplies to aid the people of the Sandhills. Continuous since they opened their doors, the SWE has remained constant in their mission of “helping others help themselves.” Since 1922, hundreds of women and men have brought their goods, their crafts and their talents to the Exchange to sell, and in return, took home needed monies to their families. Today, the Sandhills Woman’s Exchange continues the mission set 100 years ago by a small group of women who saw a need and had the desire to do something about it. The SWE is proudly one of 16 remaining members of the Federation of Woman’s Exchanges, the oldest continuous charitable organization in the United States. 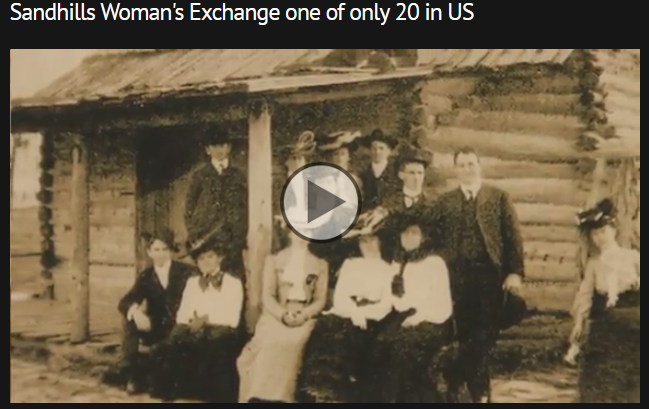 “I imagine living 17 miles from the tiniest town, caring for 2 cows, 4-8 children and all the yearly budget depending on whether the tobacco and cotton crops were good or poor and suddenly finding by spending a few hours a week hooking rugs out of thread bare garments or knitting cotton gloves for the more fortunate who hunted to hounds, that you could have from $5 to $200 a month to spend on luxuries. It would be hard for us to really conceive the joy it brings . . . And a feeling of satisfaction to those in touch with this enterprise.”